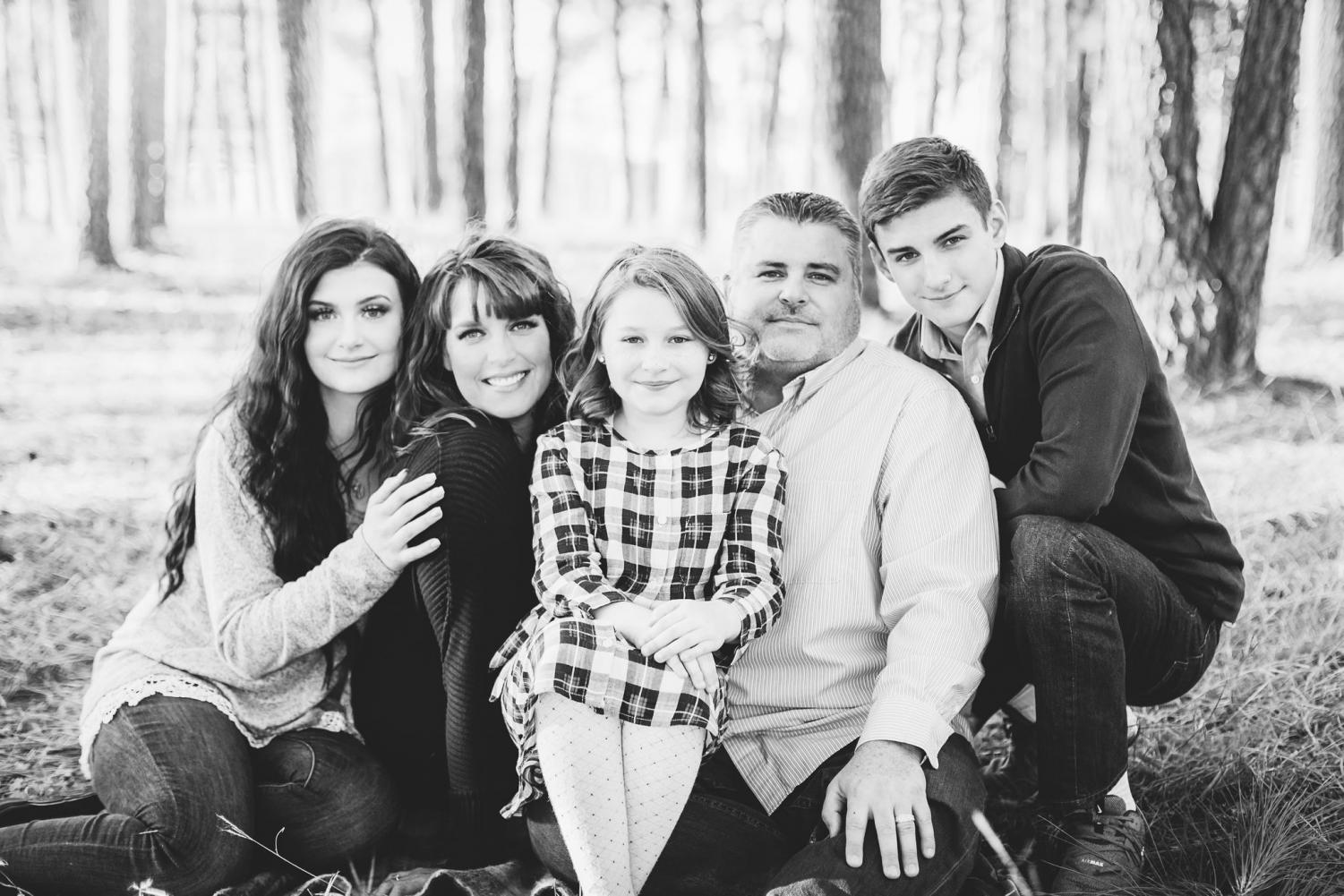 From left to right: Mariah Baysinger, Kristie Baysinger, Lucy Baysinger, Orrin Baysinger and Wyatt Baysinger. The Baysingers have received around $11,000 from the community donating to their GoFundMe.

Family finds hope after loss due to fire

Editor’s note: This story won first place for news features in the 2020 Columbia Scholastic Press Association’s Gold Circle Awards. It was also named as a superior news feature in the TAJE Best in Texas contest.

Highland Village resident Kristie Baysinger went outside with her kids and called 911 while her husband tried to tame the flames in the attic with a water hose. After the operator told everyone to evacuate the house, the family stood across the street and watched the fire unfold. At first, Kristie was calm, assuming that the fire was minor, unaware that within the next few days she would be searching through rubble for any remnants left of their lives.

Church on Sunday afternoon is a routine for the Baysingers. On Jan. 5, Kristie, her husband Orrin and their children sophomore Wyatt and 11-year-old Lucy got home around 5 p.m., changed into their pajamas and started a fire in the fireplace like they always do.

Shortly after the fire was lit, Orrin called for Kristie from the living room.

“Kristie, do you hear this?”

An unnatural crackling sound traveled up the wall next to the fireplace Then, Orrin told Kristie to go outside and check for smoke.

She knew something wasn’t right, so she ran through the house to check the garage wall, since it backed up to the fireplace.

When she opened the garage door, the wall was bubbling out.

Her eyes caught the attic door, which was close to the wall. She yanked it open and saw that the attic was full of flames. Kristie ran back inside to warn her family.

Their Google Nest system was too late to warn them, and by the time Kristie was telling Wyatt and Lucy to grab the family’s two French bulldogs and pet bird and get outside, the monotone voice was repeating, “There’s smoke in the kitchen.The fire alarm is very loud.”

Kristie felt reassured that the fire would be easily tamed and leave little damage, but as time went on she became more and more worried.

“I don’t know why I thought that fire is not fast and quiet. I just thought, ‘It’s not going to be that bad, it will be okay,’” Kristie said. “Never did I think, ‘I need to grab things.’”

The firemen arrived after a few minutes and hosed the fire down, but they didn’t leave after it was extinguished. If the embers were hot enough, the fire would relight.

In the meantime, the firemen gave the Baysingers an opportunity to save only one item from each of their bedrooms.

“I was thinking of all the things that I use every single day and that I can’t live without and I asked for my airpods and he got them… I was kind of shocked at the same time about what was happening,” Wyatt said.

Kristie chose her collection of rings which included her and her husband’s wedding bands, and Orrin chose his wallet and keys. Lucy wanted to save her Mickey Mouse Beats headphones, which were a gift from Santa.

Later, Wyatt remembered an item he needed to ask for. The picture that he kept hanging in his room, a pocket-sized photo of his childhood friend Dylan who tragically passed away at age 5.

“Wyatt would keep that in his closet so when he opened up his closet door he would see Dylan,” Kristie said.

He asked one of the firefighters if they could retrieve it, but his room was unsafe to go in.

After around two hours of waiting, the Baysinger family eventually decided to leave the scene around 8:00 p.m. With a debit card given to them from the Red Cross, they drove to Walmart for some clothes.

“I don’t even remember driving to the Walmart. I was in such shock about what had happened. Trying to walk around and find socks, underwear and an outfit was so hard for me,” Kristie said.
Then, she received a call from her neighbor.

“My neighbor said, ‘Kristie I’m so sorry to tell you this, but your house is on fire again. There’s 30 foot flames in the air. We just called 911. I’m so sorry,’” Kristie said.

Orrin convinced her that returning would only result in more hurt for the family and it was best to get a hotel room and visit the house the next day.

“The next morning, we honestly thought we were going to come back to ashes on the ground,” Kristie said.

Now… I’m starting to see the blessings out of it.”

Wyatt even began telling his friends that his house was completely destroyed, and the family began to wonder if they had anything left at all.

“I was like, ‘It’s all gone guys, it’s all gone. But we have each other, we’re going to make it through,’” Kristie said.

Upon returning, they found that the overall structure of the house was still intact, but all of their personal belongings were now destroyed by the fire, including the picture of Dylan.

Many people and organizations have reached out to help the family, such as local schools, coaches and other community members through items like gift cards, clothes, toys and donations to their GoFundMe page. But even with all of the help, the Baysingers still lost irreplaceable items that they could not get back.

Kristie Baysinger climbed over the hill of charred rubble of her life that now occupied her garage, wearing the large working boots that her neighbor had left outside for her. If the ceiling of the room was still intact, the top of her head would be bumping it.

She searched through the rubble until she finally reached what she had been looking for the now-charred dresser which was a gift from her husband’s grandmother. It was to be a wedding gift for her eldest daughter someday.

The baby books, the family photos, the passed down recipes, they assumed everything was gone. However, upon a conversation with a family member, Kristie remembered the two boxes in that dresser in the garage, which held what might possibly be the only family photos the Baysingers had left.

Kristie opened the drawer of the dresser, and there were two unharmed boxes sitting side by side. Just like she had hoped, they were full of family photos. She opened each one and began sorting through the pictures until she reached the bottom of each box. At the bottom of one of the boxes she found a card pictured with Jesus Christ.

She held the card and flipped it over. On the back were notes of the story of Dylan’s passing, told by Dylan’s mother at a church camp Kristie attended a year after his death.
Upon finding the card, Kristie immediately called Dylan’s mother, Darylin Farar.

“Not only is Heavenly Father watching over us, but your son, he has a hand in this too,” Kristie said on the phone call.

Kristie knew that Wyatt was upset over the loss of the small picture of Dylan, so she asked Darylin to send her a new one.

A few days later, Kristie recieved the picture in the mail and gave it to Wyatt as a surprise.

“The first couple of days when people would say, ‘How are you doing Kristie?’ I would say ‘I’m in a nightmare,’ and now… I’m starting to see the blessings out of it,” Kristie said.

The recovered pictures and the card were a symbol of hope for a family who had lost almost everything.

The family is currently looking for a rental house to live in while they work on repairing their home. In the meantime, Kristie and her family are staying hopeful about the future.

“Heavenly Father’s got to have some kind of plan for us,” Kristie said.