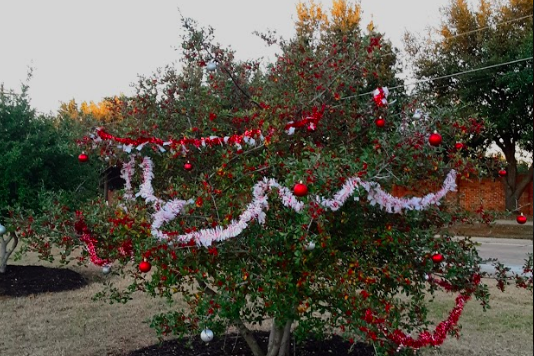 Trees decorated with tinsel and ornaments by members of Help a S.T.A.R. can be found along Morris road.

Flower Mound resident Kim Berg passed one lonely tree every time he commuted to work at the airport during the holiday season. It was off to the side of Highway 121 and had a single garland wrapped around it.

“It would just put a smile on my face,” Berg said. “Just imagine how many other people got satisfaction having seen that one little tree.”

He wanted even more people to feel this same holiday cheer. Thus, he created the Facebook group Help a Sad Tree Along the Road. It started with three to four members but grew to 900 over the course of nine years.

Many local residents decided to participate in this community tradition to bring some holiday joy. For Flower Mound mother Tracy Huber, the tradition meant more than that.

Huber lost her father two years ago in October. She wanted to memorialize him, so she bought a tree in his memory. It was planted in March of 2017.

As the holiday season came near, Huber continued to hear about Help a S.T.A.R. from the Flower Mound Cares page. She wanted to join this tradition and decorate her father’s tree.

Huber’s father was a die hard Cowboy’s fan, so Huber embodied that in her decorated tree. It was covered in sparkly blue and silver spheres, showcasing the team colors. Little bronze footballs dangled off the branches.

“I thought it was just a great way to just put a bit of festive cheer in the community,” Huber said.

However, Help a S.T.A.R. has begun to expand beyond Flower Mound. Berg decided to decorate a tree while on a recent trip in London.

“I just found one that was just a little small tree off by itself and just made it stand out,” Berg said.

He is hopeful the tradition will continue to grow and is excited to see all the trees for this Christmas.