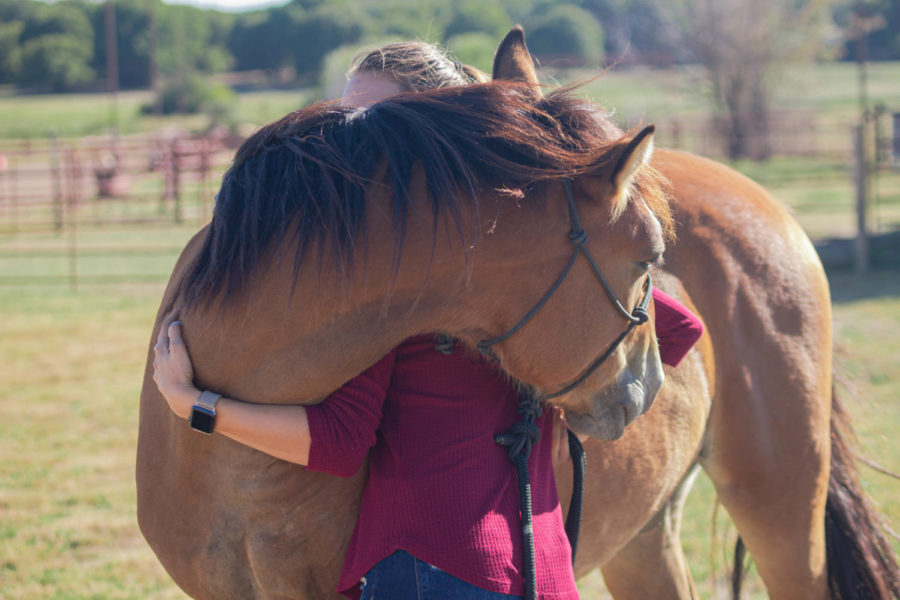 Duke gives senior Rebecca Wittek a hug after demonstrating tricks. Rebecca has been training Duke by bribing him with treats.

The grass flattened beneath the mustang’s hooves as he trotted across the pasture. Senior Maddie Trussell walked beside the brown horse, Beau. She gripped the rough rope of his halter, leading him across the field.

Looking down, she noticed the rhythm of their steps were in sync. She watched in awe as Beau lifted his hoof and dropped it to the ground with the same timing as her own foot.

Two weeks earlier, she picked up Beau after he had lived in the wild for his entire life. She was the first person he had extended contact with, and now they moved through the grass as if they were connected.

“It was a big milestone for me, to see that happen and be able to be like, ‘okay, we’re one. We’re moving as a whole,” Trussell said.

Through FFA, Trussell and senior Rebecca Wittek picked up wild mustangs to train on June 1. They planned to compete with their horses after about 16 weeks. Beau was the first horse Trussell ever trained, while Wittek’s brown mustang, Duke, was her second.

Wild mustangs like Beau and Duke are being rounded up due to their overpopulation in the wild, primarily in Nevada. To combat the lack of food, water and space, the government puts the wild horses in holding facilities. People can adopt horses to train and either keep them or find somebody to adopt them permanently. Both Wittek and Trussell picked up another mustang on Sept. 13, giving two more horses a second chance in life.

“They can’t live out there,” Wittek said. “They’re going to die and be sick. So we’re just trying to cut populations down.”

They brought Duke and Beau to a training facility in Gainesville to get them used to being around humans. To start, Wittek and Trussell sat on the fence, gripping bamboo sticks with pool noodles on the end. They then reached out to their mustangs, stroking them with the soft foam to get the animals used to being touched.

“When we first bring these horses in, they’re scared,” Wittek said. “They’re going to react to their natural instincts, but … once you finally get them to trust you and realize that you’re not going to hurt them, it’s such an amazing bond.”

The horses quickly began to trust their new trainers. Trussell was able to get in the pen with Beau the first day. He let her stroke him and begin putting his halter on, which would later be used to lead him around and train him.

Duke took a little longer to trust Wittek, but by the second day, his whole demeanor switched as he began to realize that she was there to help him.

“The first day of training was kind of intimidating to me because I had only ever rode horses,” Trussell said. “I never did groundwork and I never started a horse off from the beginning. It was crazy watching how fast he came along.”

After a couple of days, the horses were moved to Argyle, where they’re kept for the rest of their training. Before they left, Wittek and Trussell got to take the ID tags off of their mustangs.

“It’s like a connection,” Wittek said. “This horse will trust you enough, this early, to let you touch them and take this thing on them off that they’ve had on for months and months, that’s become a part of them.”

From there, Wittek and Trussell began to train their mustangs, building off what was taught each day. They started with the basics, such as walking and loading into a trailer, before moving on to more advanced skills like moving around obstacles and performing tricks. They spent two to four hours a day with their mustangs, perfecting their skills and strengthening their bond.

“They work really hard,” FFA teacher Melissa Barnett said. “I was very impressed. I’m usually the one that’s like, ‘okay y’all, we have to go home, we’ve done enough. Please go home, go do your homework,’ because they’re out there working all the time.”

As Wittek waited to enter the arena to compete in the pattern class, Duke stood still next to her, perfectly normal. But as soon as they entered the arena, Duke began biting and standing on his back legs.

“After the first class, I was very upset because he’s never acted crazy like that before,” Wittek said. “You can train horses for years and years and years, and something still may happen that you can’t predict.”

After her first performance, Wittek calmed Duke down. If she got too stressed, he would sense it and get more anxious. They still had the trail class later that day and the freestyle class the second day — they still had a chance.

When she walked out into the arena again, the crowd’s eyes were on them, but Wittek focused only on what she and Duke were doing. Duke seemed to relax as he performed what they practiced hundreds of times before. Wittek and Duke earned 4th place in the trail class and 1st place in freestyle, earning them a 4th place overall.

“I felt very accomplished,” Wittek said. “It feels really good to have a win after a loss.”

Trussell placed 10th overall, and the girls were excited to share the experience.

“I did this with my best friend, so it was a really exciting thing for both of us,” Trussell said. “So when awards were happening and stuff, we both might not have placed the best, but we were both happy with how we did.”

Trussell decided to find somebody to adopt Beau permanently because she’ll be going to college soon and wanted him to be with a trainer that will be able to regularly work him.

Two weeks after the competition, the woman adopting Beau picked him up. As she stood watching the woman lead him away, Trussell couldn’t help but feel a sense of pride. Beau calmly walked into the trailer with his new owner. Just months ago, he had never seen humans before. And there he was, getting adopted.

“That was a very prideful moment for me,” Trussell said. “I successfully trained him and the lady who adopted him was just so happy.”

Wittek found someone to adopt her first mustang, but she knew that she had to keep Duke.

“There’s just something about him,” Wittek said.  “He’s my heart horse. He does anything for me and there was just a bond that we had. So I’ll always keep him.”