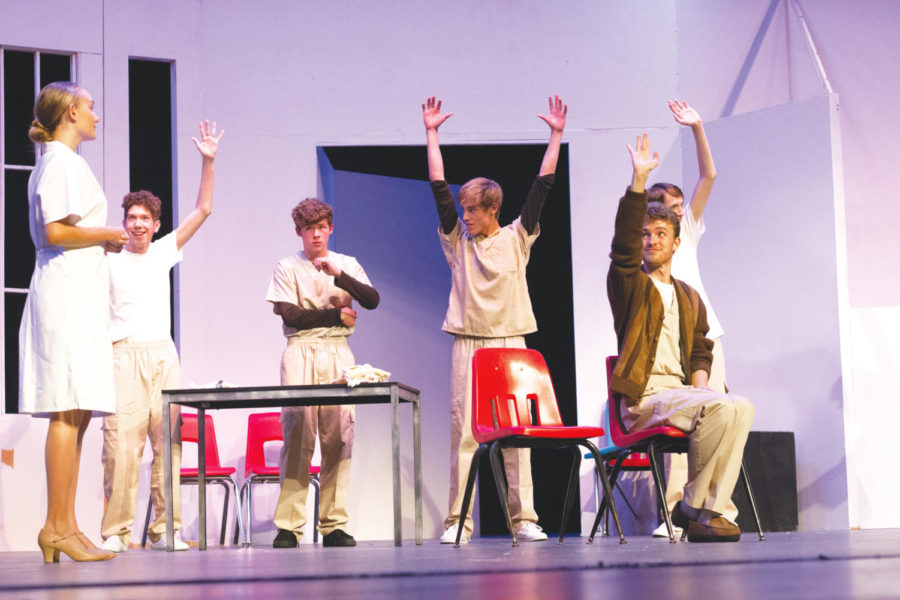 Editor’s note: this story was named as an honorable mention for entertainment features in the TAJE Best in Texas contest.

As the lights dimmed, the actors in the scene made their way onto the stage in the baggy, beige outfits. They were sittting in a group having their weekly meeting led by the head nurse. After she criticizes a shy patient, another patient revolts and asks for a vote to watch the World Series instead. Nurse Ratched, a powerful character, who is not used to being challenged, is clearly not happy about his suggestion. The rest of the group is too scared to question her authority. When the rebellious patient is not supported, he accuses the other men of being cowards.

“What are you guys afraid of? Why, you bunch of gutless wonders. I oughta just leave you to her.”

He eventually motivates the patients to find a way around the restriction and they watch the World Series, whooping and cheering at the game.

The audience watching this short preview was made up mostly of parents attending Mental Health Awareness Night on Sept. 18. The parents silently watched the events unfold on stage. When the actors took a bow and said their goodbyes, the applause showed they appreciated their hard work.

One Flew Over the Cuckoo’s Nest was originally a book written by Ken Kesey in 1962. The following year, it was adapted into a play that premiered on Broadway. Set in a psychiatric facility in Oregon, the story follows Randle McMurphy, a man who fakes being mentally ill to avoid labor at a prison work farm. The play centers around his power struggle with the head nurse, Nurse Ratched, who keeps the men of the facility in line by exploiting their weaknesses.

Ratched is the main antagonist of the story, as she controls the men of the psychiatric ward by downgrading them. Senior LA Herba, who plays Ratched, says that her power is what defines the character in the story.

“She takes her leadership very seriously. It’s about control, about manipulation,” Herba said.

Herba had loved this movie since she was young. When she learned that theatre was doing this production, she had her heart set on playing Nurse Ratched.

“I loved Nurse Ratched. I used to think she was so beautiful and powerful,” Herba said.

“McMurphy is kind of an anti-authority character,” Benford said. “He’s a selfish, weird dude, what I refer to as ‘socially dominant.’”

Benford says playing this character was a different experience than his previous roles.

“The plays I’ve been a part of before were not representative of an issue that could be translated into modern life like this one,” Benford said.

The play’s main focus is making mental health a less taboo subject. Theatre Director Denise Tooch says the reason this play was selected was to start a discussion about mental health within the local community.

“We chose to do this play because we wanted to make sure we used our voice in a way to say ‘hey, this is still something we need to think about as a society and fix,’” Tooch said.

The cast feels a lot of pressure to put on this production because of the impact it can make. They want to portray the characters and story just right. However, the cast has a certain power that allows them to bring words on the page to life.

“Human portrayal is so much more powerful than anything books can present,” Benford said.

The actors researched their characters by watching the movie adaptation. This helped them further grasp the theme of mental health awareness.

“I was doing research on mental illnesses and I was looking at how much I didn’t know,” Senior Davidson Brown said. “I think that if I can start bringing it up a lot more as a topic that we talk about more, it would be better.”

Brown says that the production can teach a powerful lesson about individuality and finding identity.

“The play is about staying true to who you are and not giving in to other’s ideals,” said Brown.

Although the play was written decades ago, there is a certain timelessness to the way the topic of mental health is confronted in the play, according to Tooch.

“Even though this play was written in 1963, there are still some things in our society that are addressed in the play that we’re still struggling with,” Tooch said.

What really made the directors choose this play, however, was the fact that many of the characters face the same mental health issues that teenagers do, including social anxiety disorder and depression. The play also covers topics like homosexuality being viewed as a mental illness in society, by having a character who has problems accepting himself as a gay man.

Tooch hopes that teenagers and parents can learn about mental health and those that are affected by it from the play. One Flew Over the Cuckoo’s Nest will be performed on Oct. 3 – 6.

“I hope that the play allows for someone to look at the person next to them and say ‘I don’t think I ever understood it that way, tell me some more about it,” Tooch said. “And that it starts a dialogue between a parent and a child that comes to see the show that opens the door for the child to be able to express their fears and their concerns.”