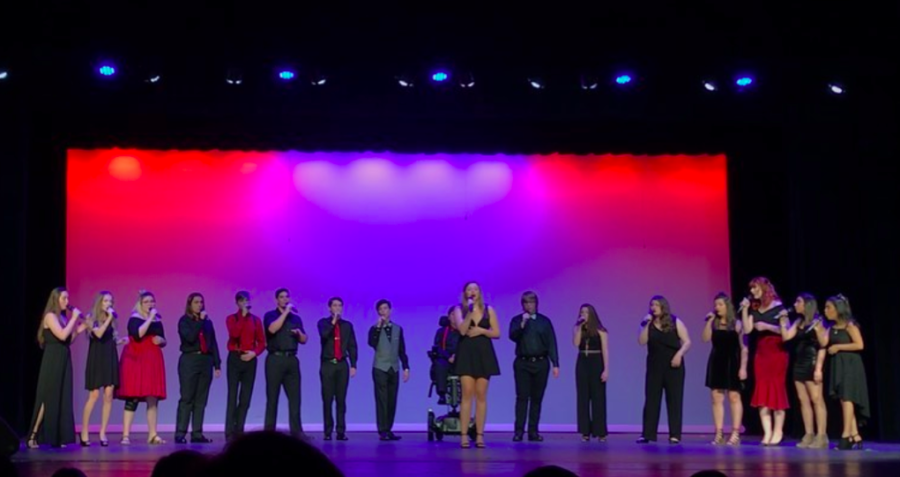 Dually Noted is comprised of sophomores, juniors and seniors. Being in the group provides the members with an outlet to have fun and be creative.

The bright lights of the auditorium blinded the members of Dually Noted. The clicking of the girls’ heels and the audience’s applause quieted as they got into their positions. The sound of the pitch pipe broke the silence as the group hummed their notes.

The group relaxed as the lyrics of “Just the Way You Are” filled the room. Once they got into their groove, the group was in sync, dancing with each other.

“You have the bright lights, and you’re in really uncomfortable shoes, but none of that matters because you’re up there with people you love singing with, and you get to show off all the hard work,” junior Mackensie Turner said.

Director Drew Howard watched backstage as they sang, his nerves fading as the group hit every note, performing even better they had in the dozens of prior rehearsals. 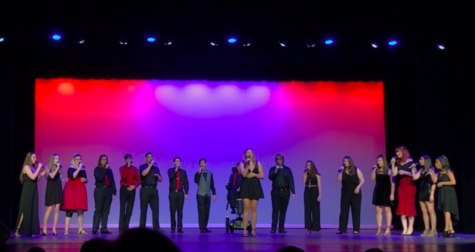 SubmittedDually Noted is comprised of sophomores, juniors and seniors. Being in the group provides the members with an outlet to have fun and be creative.

“Watching them perform, I really enjoy it, but it’s a really strange feeling because it’s the moment that I, as their director have to let go. When they walk out onto that stage, I don’t go out there with them,” Howard said. “…they always perform incredibly well. It’s usually just a really proud, really excited moment for me after those first nerves go away.

Dually Noted is the first coed a cappella group in school history. The 18 person group was formed at the beginning of this year when not enough boys auditioned to keep the all male group, Voice Male. The group was created from scratch; the members weren’t even given a name. They decided everything about the group, including what they would wear, what kind of songs they would sing and the overall dynamic of the group. They had to figure out  how to separate themselves from other groups, creating their own completely original group, paving the way for future members of Dually Noted.

Despite their doubts about all being different, the group decided to come together and create a fun environment where they can enjoy singing. This became the factor that set them apart from other groups. They decided to try to not be a perfect, cookie cutter group, but instead embrace being their own “island of  misfit toys” as they called themselves and using it to their advantage.

“It’s kind of like a group of really good people that aren’t in the same class or the same grade and we just come together and sing,” junior Landon Bradley said.

The formation of Dually Noted came as a surprise. Many expected that Voice Male and Fusion would remain the only groups.

“Initially I was a little sad that Voice Male wouldn’t be a thing, but in varsity choir we sing with girls. It’s a mixed group, so it wasn’t that different for me. I was just under the impression that it was going to be not mixed, but I was happily surprised,” Bradley said.

In contrast to formal choirs, Dually Noted has fewer people and performs different genres of music. However, the members adapted to the unique characteristics that come with being in a coed a cappella group such as working with people that have different levels of experience and personalities.

“It’s a very wide variety of personality types and people,” Howard said. “It is a melting pot of personality, of levels of experience. There’s anything and everything in the group, and it’s turned in to just a really fun, hard working, excitable group of people. You would never, in any other circumstance, expect those seventeen people to come together over anything.”

Having a coed group allows the group to hit low, bass notes as well as high, soprano ones. This separates Dually Noted from all female or all male groups that can’t hit such a wide range. This was a struggle for them to adjust to, but when they got used to it, they recognized it as what made them special.

“Getting to have the entire, really giant range of sound that we can produce, it’s really, really interesting to be able to do what no other group has been able to do,” Turner said.

What makes Dually Noted even more unique is the wide range of personalities in the group, according to Howard. Everybody stands out in a special way, which has been a challenge and another cool aspect to the group. Though they are so different, they all unify over doing what they love.

“There is not a cookie cutter Dually Noted member. There is not. You look at a lot of other a cappella groups, and nobody stands out,” Howard said. “The award winning, top groups just like in Glee have that look, that factory made appearance, and what I like about the group is you can just look at us and tell there are a lot of different kinds of people in this group. That’s a really, really cool thing we have going for us.” 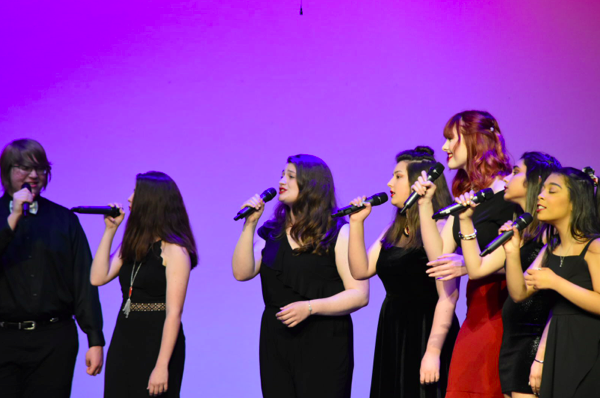 SubmittedDually Noted performed for the last time of the year in North Texas A Cappella Festival, which was hosted on campus.

Dually Noted meets for two morning rehearsals a week and one Saturday workshop a month. During rehearsals, the members get new music, practice it and figure out how they can put their own unique spin on the songs. They sing a wide variety songs such as “Skyfall” by Adele, “Rewrite the Stars” from The Greatest Showman and “Somebody to Love” by Queen.

“I really, really enjoy getting the new music and getting to branch out from standard choral stuff, like the really proper stuff, and getting to do pop,” Turner said.

The members of Dually Noted burst through the front door into the cold winter night, cheering as they ran to the middle of the street. The idea of going caroling had only interrupted their Christmas party minutes ago, but they were already running to the first house and knocking on the doors of houses in the neighborhood.

As soon as the door cracked open, the sound of the pitch pipe and Christmas music filled the air. The singers ended with a Christmas rendition of “Africa” by Toto before running to the next house with childlike excitement.

After singing at more houses, the members sprinted back to where they were having the party, racing to open their white elephant gifts. They quickly sat by the fireplace bundled up in blankets as they began their gift exchange. Tissue paper and bags were flung at each other and on the floor as they opened them and stole each others’ presents, telling jokes and enjoying each others’ company.

“It’s kind of like a big family,” Bradley said. “We all care for each other.”

Although the group has become a family and has had many fun times in each other’s company, the highlight of Dually Noted is performing, according to Turner. The thing that unites this big group of friends is their passion for music.

“I love the adrenaline rush from [performing],” Turner said. “What kind of happens is I think about everything else, and sometimes, I just let my body do it, muscle memory from running the songs in rehearsal.”

The experience of actually being on the stage, with bright lights and all eyes on them, is a completely unique experience compared to rehearsals in the choir room.

“In rehearsals, sure, we sound pretty good. We jam out in rehearsals,” Turner said. “But the whole dynamic of everything whenever we get out on stage is completely different, and we might not be fully prepared right before and we manage to pull it off for our performance.”

One of the most difficult obstacles the group had to overcome is the mindset that they are a junior varsity group. Dually Noted constantly compared themselves to groups that have been around for years and have more experience.

“I think the greatest obstacle that we’ve had to overcome is to stop comparing ourselves to the other groups, both the other groups in Texas, in the area and within our own school,” Howards said. “It’s been the biggest challenge to not allow ourselves to be the second group or the people that didn’t make it because we are more than that when we come together and we are there.”

Before each performance, the group huddles around Howard, and he gives them a pep talk, telling them how far they’ve come and how proud he is. These pep talks take the groups’ nerves away and pumps them up for their performance.

“Really, really building them up as much as an individual organization has nothing to do with the rest of the world,” Howard said. “Building up that they get to live in that moment and that having them imagine their ideal picture of themselves and that when they walk out onto that stage, that is the moment they get to prove to the audience, to everybody that they’re singing to and themselves, that that is the person they are.”

Afterwards, all of the members of the group and Howard gather around in a circle and put their hands together before cheering, “one, two, three, one hundred emoji,” a phrase that has become a sort of motto for the group after Howard began ending all of his texts by typing out “one hundred emoji.”

Everyone in the group loves music, giving Dually Noted its ultimate purpose – to provide a place for students to have fun and enjoy singing a style of music that they normally don’t get to.

“The best part is watching them be proud of themselves when they do something great. There have been some great, amazing moments,” Howard said. “This group came into existence with the predisposition that it was going to be an uphill battle, and they weren’t sure about this experience. To watch them go out there, perform, be happy about their performances and be proud of themselves, those are the best moments.”