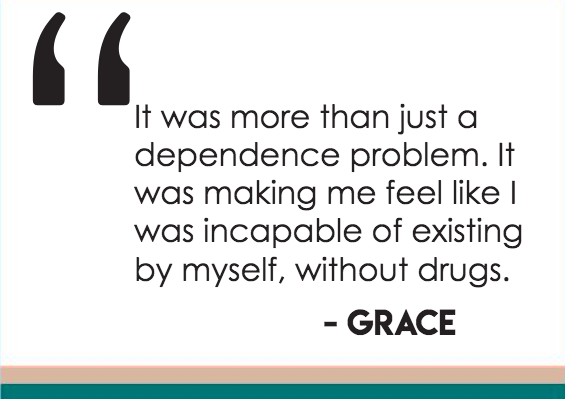 Editor’s note: This story was a part of the in-depth package of our April 26, 2019 issue, which won best series or project in the Dallas Morning News high school journalism contest. It also won second place for print in-depth news/feature packages in the ILPC contest.

*Names have been changed to protect the identity of those involved

Senior Zoe*, then a junior, sat in a coffee shop staring at her computer, scrolling through online notes for her math class. She dragged her tired eyes across the screen, the words and numbers blurring in and out of her vision. She couldn’t make herself focus on anything other than the complete misery she felt, as tears began to swell in her her eyes.

Suddenly, she heard someone asking if she was okay. She opened her eyes, to see a man tentatively sitting down across from her. She burst into tears, and for an hour, relayed the last year and a half of her life to him, a complete stranger. The drug abuse, the dependence and the overdose earlier that day that left her unconscious for 12 hours.

“It wasn’t like I was trying to kill myself. It was really just to chill, and I was freaked out and stressed,” Zoe said. “It felt like my only option, even though it wasn’t.”

He listened, and even began to cry. When they were done talking, he went with Zoe to tell her mom everything that had happened. After telling her mom, she cried again, but this time, it was from relief. She felt as though a weight had been lifted.

Zoe’s misuse of prescription drugs began a year and a half before the overdose, when the stress of a back injury, her parent’s divorce and academic expectations became too much for her. She saw medication as her last and only resort, and began to take the hydrocodone pills her neighbor gave her for the back pain.

“It was very minor at first, mainly experimental, and turned into a year and a half long dependency,” Zoe said. “That almost seems like a different lifetime. It’s so saddening and dark that I lived that way.”

She recognized the abuse as problematic, but the release that it provided her was too hard to let go of. What followed was a pattern of battling, and inevitably caving to her dependance.

“I always said it was the last time I was going to take them, and I said that to myself every single day. And it never stopped, ever,” Zoe said. “The only way I was able to stop was after telling people, because it held me accountable.”

At first, the hydrocodone freed Zoe from the stress and anxiety that she constantly dealt with. She would take up to three at a time each morning to feel and look functional, and would even take a second round of pills later in the afternoon on her worst days. However, the effects of her daily use of the drug began to take a toll on both her mental and physical well-being.

“At the time, I genuinely thought I couldn’t live or function without them,” Zoe said. “But in the long run they were completely debilitating, and were way more problematic than I had intended.”

By the time Zoe realized that the effects of the drug were going beyond the temporary high, it was too late. Her dependance had taken over, and her body began to experience withdrawal whenever she tried to stop taking the hydrocodone.

“It was more than just a dependence problem. It was making me feel like I was incapable of existing by myself, without drugs,” Zoe said. “I was so socially secluded, and reclusive in my room, and I struggled with self harm.”

Zoe said the hydrocodone, began to diminish not only her well-being, but her friendships and family dynamic. However, she didn’t recognize the problem at the time.

“I thought I was happy. But looking back, it was really messed up. I was doing terrible things, and they were eating away at me, and I wouldn’t want anybody else to go through that,” Zoe said. “I know now that that wasn’t real happiness. It was a distortion.”

Zoe said that one of the hardest aspects was the process of quitting. She was forced to lay in her room in the dark for days at a time to combat the severe withdrawal. Zoe also revealed the abuse to her friends, and found overwhelming love and support. However, some of her friends didn’t believe her story, which Zoe says is because she doesn’t fit the usual stereotype for a drug abuser.

“The picture that has been portrayed of drug addicts is not accurate at all,” Zoe said. “You’re supposed to be on the side of the road, in and out of the hospital. Your teeth are going to fall out. Your skin will fall off. I get the scare tactic, but I think that it’s important that we focus on the fact that it can affect anybody.”

Zoe attributes these misconceptions about drug abuse and abusers to the current lack of education about drugs in the community. She believes that educating high school students about drugs would provide a better support system for those suffering from abuse and/or addiction.

“That’s genuinely what the saving factor was of this entire situation,” Zoe said. “It was that I told a stranger about it, and that he was able to listen to me without judgement and believed me despite my appearance and socioeconomic position.”