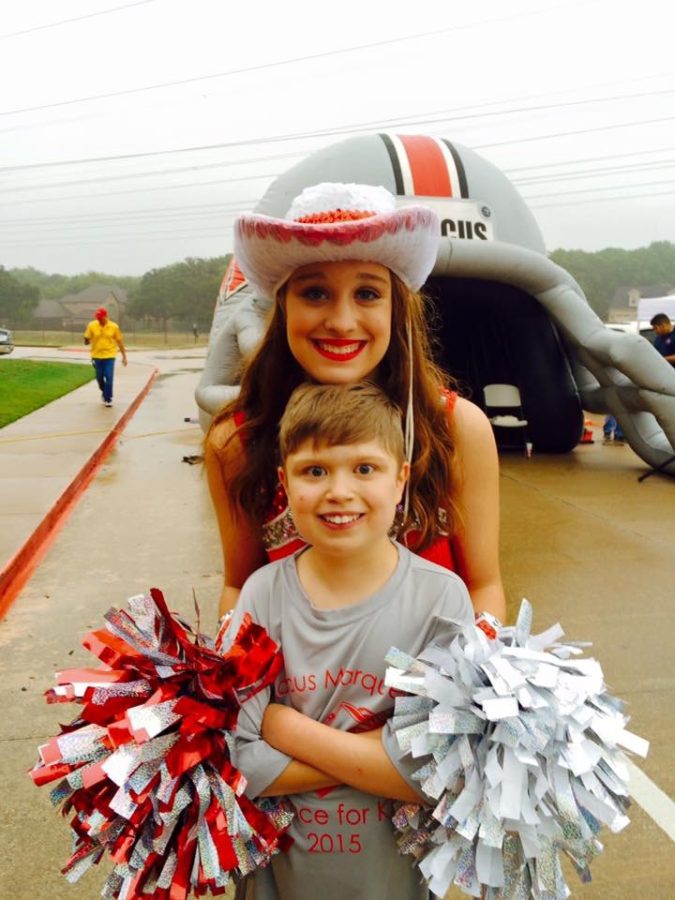 On senior Peyton Mowl’s last birthday, the Marquettes held a 5k marathon and dressed in their full uniforms to send off the runners. Peyton’s family was in the crowd cheering with her. Jacob loved to watch his sister perform in the Marquettes.

The Mowl family dragged themselves into their home. It was Dec. 21, almost Christmas. They spent so much time in the hospital that the days had felt much longer.

The family initially coped in their own ways after freshman Jacob Mowl passed away. Senior Peyton Mowl walked around the house aimlessly as she thought about her younger brother Jacob and how he had taken his final breath the night before. Micah, Jacob’s younger brother, knew he would never get to eat Cheetos or play WWE video games with him again. Chris, their father, tried to be supportive for his family, but he was heartbroken. Lori, their mother, still had tear streaks running down her face.

The house that surrounded the grieving family was bare. The Mowl family is known for their extraordinary Christmas decorations, but there was not a tree or stocking in sight. To lift their spirits, the family decided to celebrate their favorite holiday, starting with a mass decoration of the house.

“I am so grateful to have that holiday to hold his memory to,” Lori said. “Every year when we get that stuff down, we get to celebrate him too. For a time of year that’s so special to so many, it’ll be even more so to us.”

Each light was perfectly placed as they put a personal tree in everybody’s room. They had heavy hearts as they hung up ornaments of all shapes, sizes and colors. The Mowls gathered to put up the main tree, and then arranged each stocking until they got to a deep green and red one with Jacob stitched in black cursive. They went silent, then placed the stocking in the line with the others to show that he would always be a part of them.
• • •
December 20, 2019

Peyton walked to Jacob’s bedside where he lay with his eyes closed, shallowly breathing. She smiled sadly when she saw the small stuffed dog with a bright smile that Jacob adored tucked under his arm.

Loved ones filled the room and extended down the hallway. Tears brimmed her eyes as she looked at the people who stood red faced and teary eyed around Jacob, and she walked to the front of the room.

Peyton wiped her tears as she closed her eyes and began to sing the melody of “Oceans (Where Feet May Fall)” by Hillsong UNITED. Her voice filled the room. All talking ceased.

As she stopped singing, the room was silent, and the only sound was the beeping of hospital monitors.

“I knew it was something I needed to do because that’s what I do best,” Peyton said. “That was my own personal way of saying goodbye. Not letting go — but working towards being okay.”
• • •
Jacob Mowl was born with a congenital heart defect called Hypoplastic Left Heart Syndrome. Later he developed Protein Losing Enteropathy. His medical conditions meant that he spent around 600 days in the hospital.

When he was home, he enjoyed things like WWE, cooking shows and spicy food. He would often be glued to the television watching “Chopped”, motivated by his own desire to become a chef. He enjoyed going to Rosa’s and gorging on chips and salsa, and conquering the hottest salsas and hot sauces. He loved things as simple as mall walking with his grandparents and weekly dinners with grandma.

“We never viewed it as he was disabled or not a normal kid,” Peyton said. “He was just my brother. He never acted like he felt sick. He found ways to interact with the people around him and have an abundant life. “

From a young age he had to go in and out of the hospital for various surgeries and appointments, but his family said that he would wake up in the morning happy and figure out what they would do each day. When they went to Philadelphia for a surgery, Jacob planned sightseeing and local activities to do when he was able. Lori said he didn’t want to miss out on life.

“He woke up beeboppin down the stairs with a big smile every morning,” Lori said. “That’s just who he was.”

Lori herself admired Jacob’s love for life and was so proud of the life he lived. She expressed that he did have a short life, but it was enough. She truly believes he lived the life that many people can only dream of because of his never ending happiness.

“I feel more than anything proud to have been his mom,” Lori said. “The one thing you want more than anything is for your kid to grow up and do something that makes a difference, and I feel like Jacob did that. He just did it in 15 years.”

The family and others who knew him have been outspoken about their pride for Jacob, They saw how he lived every day to the fullest even through the constant doctors appointments.

“He impacted so many people’s lives, and he did everything with such purpose and joy,” Lori said. “I couldn’t ask for a better son. That’s what’s hard. That little piece is gone.”

The family often refers to Jacob as their guardian angel. The family explained that knowing he was looking over them from Heaven gave them piece of mind during their grieving.

“It’s sad, but one thing I realized the day he passed is that he’s looking out for us,” Peyton said. “It’s hard living without him, but knowing that his purpose was fulfilled made it okay. It’s easier knowing that he wasn’t taken too soon.”

The Mowl family has a saying—we won’t move on, but we will move forward. They recognize and value the importance of true mourning and created a safe space with each other to openly remember Jacob.

“It’s okay to grieve,” Peyton said. “You’ll never forget because your family members have a huge impact on you. They are a part of who you are, but you have to keep living.”

In the last few months, the Mowl family hasn’t tiptoed around sharing their favorite memories of Jacob. Peyton’s is how they always bought two bags of Cheeto Puffs. One for the family and another for Jacob because he would suck the cheese off of each Cheeto and put them back in the bag. During first few years of his life, he couldn’t eat solid foods and enjoyed the flavor of Cheeto Puffs. The quirk was something Jacob didn’t let go of after he started eating solid foods.

“There are some days where you are so overcome with grief and sadness, and those days are okay,” Lori said. “We as a family have been intentional to spend time together, to do things as a family and to hold on to things we have.”

The Mowl family feels like continuing their life helps them deal with grief. Activities like Micah’s one act play and Peyton’s college applications keep them busy, and moving forward.

“The hard parts have been Peyton filling out scholarship applications, and when they’d ask how many siblings she had, she would put one,” Lori said. “It breaks my heart, but that’s the world in which we live.”

Peyton said their faith has made the biggest impact on the grieving process and medical journey. Her family all have individual values of faith, and made an agreement that they were not going to be sad forever.

“This earthly life is temporary, and even though his life was shorter than ours, in the grand scheme of everything, we’ll all be together again closer than we ever were on earth,” Peyton said. “This isn’t the end.”