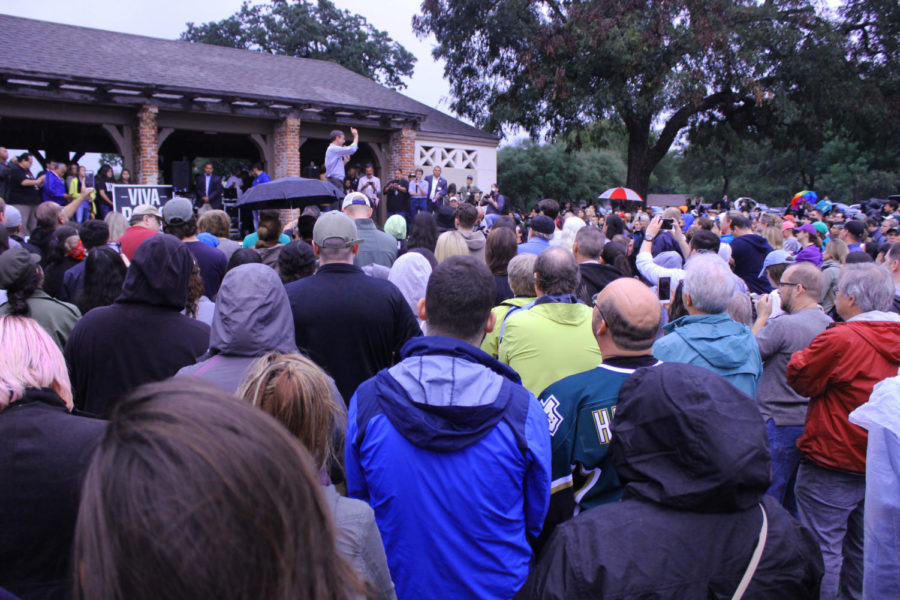 Congressman Beto O'Rourke held a rally in Fort Worth

The partisan split
Just turning on the local news is enough to hear people arguing about the nation’s political climate. Walking around school, it’s common to overhear heated debates about breaking news and the senate race. For the majority of U.S. history, there have been two major opposing parties. However, in recent years, the division within the nation has widened, not only affecting adults, but students as well.

“The current division in politics is ripping America in half between Democrats and Republicans,” junior Kristin Burnthorne said. “It’s hard to find a compromise because people really cling to their values and refuse to be open minded.”

Previously, the school formed a Political Club so students and teachers could discuss their opinions on the current political climate and prevalent issues. Former member, senior Logan Sumich, said that having access to a place where students are able to openly engage in a conversation about politics has helped them gain perspective on certain subjects. By listening to others, members learned how to look at politics through different points of view.

“It shows students that political discourse isn’t exactly partisan,” Sumich said. “There’s always another side to an issue.”

While some students believe current discussions have helped merge gaps on the political spectrum, others still consider there to be a large divide. According to a recent Marquee poll of 280 students, 59 percent think that there is a divide within teens’ political opinions.

Senior Anna Helmers said that many people in the area have not been exposed to differing perspectives, which has caused them to be firm in their own beliefs. She feels that this lack of exposure has led others to rely on the viewpoints of their peers or parents, rather than developing their own thoughts and ideas.

“These young voters need to learn to put themselves in other people’s shoes,” Helmers said. “Your opinion should be formed off of conversations about policies and learning. Opinions should not be formed off of someone else’s.”

AP Macroeconomics teacher Matthew Stoeberl wants to encourage young voters to educate themselves before going to the polls. He considers researching candidates to be crucial to voters’ decisions. Stoeberl believes that by finding a few issues that matter to young voters, they will be able to make informed, independent decisions when it’s their time to vote.

“Maybe you can’t vote but there’s nothing stopping you from learning, and that’s what I think people [should do],” Stoeberl said. “Find the things they care about, really dive in and educate themselves about it.”

The influence of social media
The large presence of technology in today’s society has created a widespread platform where people can voice their opinions and spread ideas. The access to social media and mainstream news coverage has led to the idea that action can be taken through liking or sharing a post.

Senior Kyle Lleras said that political activism today contrasts past movements in America. He said that when comparing student led civil rights movements in the 1960s to online movements today, there is now a lack of commitment to spreading political awareness, as accessibility to online sources has created a trend of laziness.

“I think the death of this country is going to be in the ‘slacktivism,’ and it has to stop,” Lleras said. “People can’t just tweet something and say they are politically engaged without actually doing anything, especially if they are trying to gain rights or political awareness about certain issues.”

Helmers said that this bias has led to people viewing political debates as one party versus another, when it should be about discussing what is best for the country.

“It is beyond professional politics,” Helmers said. “It has gone a step further into attacking people for who they are as a person, rather than just disagreeing with their beliefs.You can make a stance for what you believe in, but be respectful about it.”

Young voters’ impact
Over the past several years, statistics have shown that young voter turnout is significantly lower than other age groups. In the 2016 presidential election, 18-29 year olds were the lowest margin at 46 percent, whereas citizens who were 65 or older were at 70.9 percent. These numbers are also typically reflected in the midterms. The U.S. Elections Project found that the highest turnout of young voters in the midterms was 21 percent. These low percentages have led several politicians to focus their campaigns on older voters, making young voters feel ignored and even less willing to register.

“If teenagers aren’t voting, then young people become irrelevant to a politician holding their job,” Stoeberl said. “The last thing you want to be is irrelevant.”

AP Government teacher Carey Petkoff said that Texas has the second to lowest number of voter registrations in the nation. She said the young voting population that feels neglected needs to know that their vote counts.

“If no one in Texas is voting and you get a group of friends to go and vote, you could potentially swing the election,” Petkoff said.

This year, these low registration percentages have shifted, as Texas has recently hit its record high of registered voters, with over 15,000 for the 2018 midterms. Junior Armando Palacios said that he has noticed more political involvement from his peers because of campaigns and rallies targeted towards new, young voters. Palacios said that this has sparked new change in students, even those under the legal voting age.

“Students can now know that their vote counts and that their voices can be heard,” Palacios said. “They can now state their opinions and know that they matter.”
Stoeberl believes that the inclusion of new voters has the ability to alter future elections. By participating in elections, young people are given an opportunity to be heard by politicians and have a say in the issues that matter.

“History is made by the people that show up,” Stoeberl said. “I think that’s something that the young generation needs to pay attention to. If you want a voice, you need to have voting numbers.”