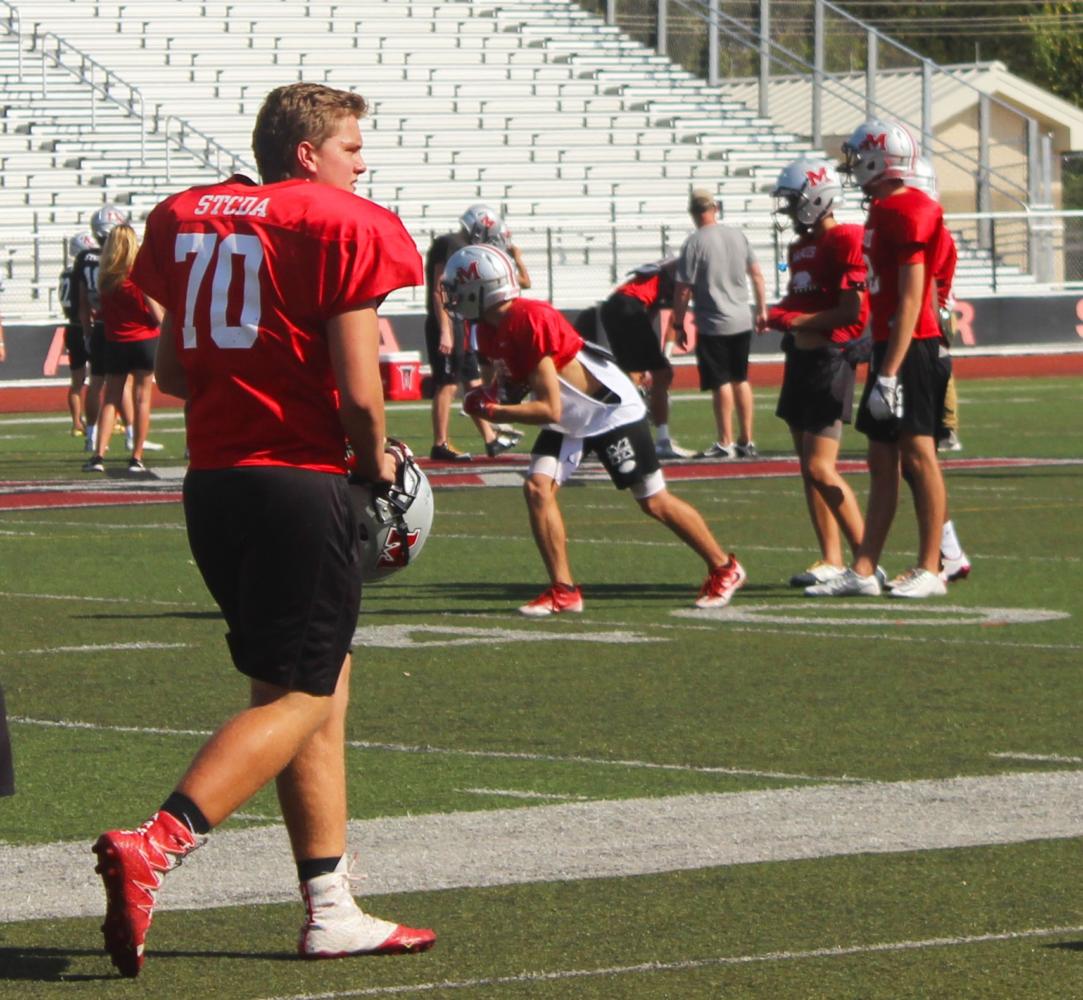 Across the line of scrimmage is the Briarhill defense, guarding their goal line from Downing. Only one yard away. The outcome of this game, the 2013 LISD district football championship, depends on this play.

Downing must score. Briarhill must defend.

Sports have always been a part of senior Tom Collins’ life. Before he moved from California to Texas during his sixth grade year, Tom played soccer. But when he arrived to the Lone Star State, he realized a different sport ruled as king.

“I’ve just always been into sports, and [football] was the big thing down here in Texas,” Tom said.

Tom, easily over 6 feet tall, plays left tackle on the varsity football team. Every school day during fourth period, Tom suits up in full pads in the midday heat. He runs through drill after drill improving his footwork, driving other linemen and running through multiple plays. Varsity players like Tom stay after school to practice and come in before school to lift weights.

Despite putting in hours of hard work every day, Tom only plays a few snaps per game. Most of the time, he backs up starting offensive linemen. But to Tom, there’s more to football  than just playing the game.

“It’s all about being a part of something bigger than what you’ve always been or what you are,” Tom said.

And it looks like he’s found just what that “something” is.

Since junior year, Tom’s used football as an outlet for being a leader. He desires to push his teammates through adversity. When other players complain about running laps, Tom reminds them that they must persevere in order to improve.

After years of playing, someone truly special followed Tom’s example — his younger brother, junior John Collins. For most of his life, John’s been a quiet kid. It takes a while for him to warm up to people and others to him.

Then he discovered football.

John became interested in the sport after he saw Tom getting fit and strong. Like his older brother, practicing every day has helped him lose weight and get into good shape, too. Since then, he’s fallen in love with football and now plays on junior varsity. He still sometimes has trouble connecting with kids he doesn’t know. But when he’s on the field, he leaves all that behind. Surrounded by his teammates, John feels included. He knows he’s a part of something “important.”

Even when he’s not in a game, John’s encircled with friends.

“In the locker room, he always comes in when I’m not there, and all the guys around him are high-fiving him and talking to him,” Tom said. “I’ve always seen him as quiet and shy around other people, but when he comes to the locker room, it’s different.”

Tom is proud of John for following in his footsteps and playing the sport he loves. And indeed, John has followed in his older brother’s footsteps as both boys play the same position — left tackle.

John looks up to the varsity football players, but especially Tom, who wants him to be the best person possible. Whether it’s during volunteer opportunities, charity events or practice, Tom is always guiding his younger brother.

“He’s just a great friend and brother to have,” Tom said. “We’re really close. We have a brotherly love type of thing. We may get onto each other, but we’re always there for each other.”

The quarterback hikes the ball. Tom shoots up from his three-point stance lunging into a defensive lineman. It’s a run play straight up the middle. Tom doesn’t think they’re going to score.

Then the crowd bursts into a frenzy of parents cheering. Moms jumping up and down, coaches hollering. Players running up and down the sideline.

Tom realizes what just happened. Oh my God, we won, is all he can think.

The Downing B-team boys hoist the trophy into the air, a well-fought win against their biggest rival. One day, Tom Collins tell his kids about this victory. And even though this game is one of his greatest football memories, the ability to play the sport he loves alongside his little brother, to mentor and better John, is something he will never forget.